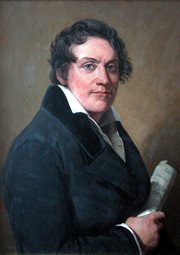 The name of this scholarship was chosen in order to honour the memory of composer/conductor/clarinetist Bernhard Crusell (1775-1838) and his special connection with Linköping, where he was for many years the military music director. The Östgöta Symphonic Winds traces its roots to the orchestra that Crusell himself conducted.

The scholarship holder is elected by a committee consisting of leading Swedish musicians and conductors.

The next laureate will be announced during a prize ceremony and festive concert in the Crusell Hall in Linköping on Friday September 16, 2022.

Holders of the Crusell scholarship

The ambition of MIL is to increase the amount of scholarship money awarded in future. You can assist us in this by making a contribution to:

The Barbro Osher Pro Suecia Foundation is the main sponsor of the Crusell Scholarship.

Bernhard Henrik Crusell (1775-1838) was a Finno-Swedish composer and one the foremost representatives of early Swedish romantic music. Between 1793 and 1834 he worked as First Clarinetist at the Royal Opera Orchestra in Stockholm and was regarded as a great virtuoso.

As a clarinetist he received great acclaim in all of Europe. He was offered a position as First Clarinetist at the Italian Opera in Paris but was forced to decline as he was not granted leave from his position at the Royal Swedish Opera.

It was natural for Bernhard Crusell, the composer, to devote himself to his main instrument, the clarinet. His production in this area comprises chamber music and three clarinet concertos. He also wrote chamber music for other wind instruments, and music for the play ”The Little Slave Girl”. In his later production his music for Tegnér’s ”The Saga of Fritiof” stands out.

Crusell translated several operatic texts, e g ”The Marriage of Figaro”. To Crusell was given the prestigious assignment of writing a cantata for the 1832 opening of the important new water-way through Sweden, ”Göta Canal”.

Bernhard Crusell had a special connection with Linköping. In 1818 he was appointed conductor of the music bands of Linköping’s two Life Grenadier Regiments, a position that was concentrated to the summer months, when the Royal Opera House in Stockholm was closed and the musicians had no salary.

The position in Linköping was one that Bernhard Crusell had for 18 years. During that time he made his mark on the musical life of the city. One highly esteemed event was the series of charity concerts held in St. Lars Church under his direction. From these proceeds a fund was created in 1826, nowadays known as the Crusell Foundation.